The Power of Project Controls

In today’s construction environment, project controls play a more important role than ever in successful project management. Let’s face it: the past two years brought a whirlwind of change and disruption to our lives. Between the supply chain being disrupted, a global pandemic cycling around the globe again and again, challenges finding qualified labor, and more severe weather patterns, there is a heightened risk that things won’t go quite as planned in the construction industry.

Nowadays, winning the bid for a multi-million or even billion dollar project may result in a feeling of unease instead of feeling like the great victory that it should. That poses quite a problem as it should still feel like a victory. But, with the amount of unforeseen circumstances that arise all around us in the built world, how do you successfully deliver a beautifully built project on time, on budget, and still make a profit?

One solution, and quite frankly the best solution, is: Strong Project Controls.

What are Project Controls?

Project controls are defined as the data gathering, data management, and analytical processes used to predict, understand, and constructively influence the time and cost outcomes of a construction project or program, through the communication of information in formats that assist effective management and decision making. In other words, project controls are analytical processes and outputs that individuals involved in construction can use to understand and communicate that result in successful outcomes of their projects.

While some may believe that Project Controls lives within a department, it doesn't.  It’s a mindset that should make up the fabric of a construction organization.  Imagine a world where every individual involved appreciated project controls for what they are - instead of thinking it's something that a separate team is doing behind the scenes.

Imagine if PM’s, supers, executives, and operations team members all had visibility on analytics designed to ensure that project performance, and risks thereof, was understood completely, and communicated regularly…  Projects finishing on time and on budget would be the norm, instead of the exception. 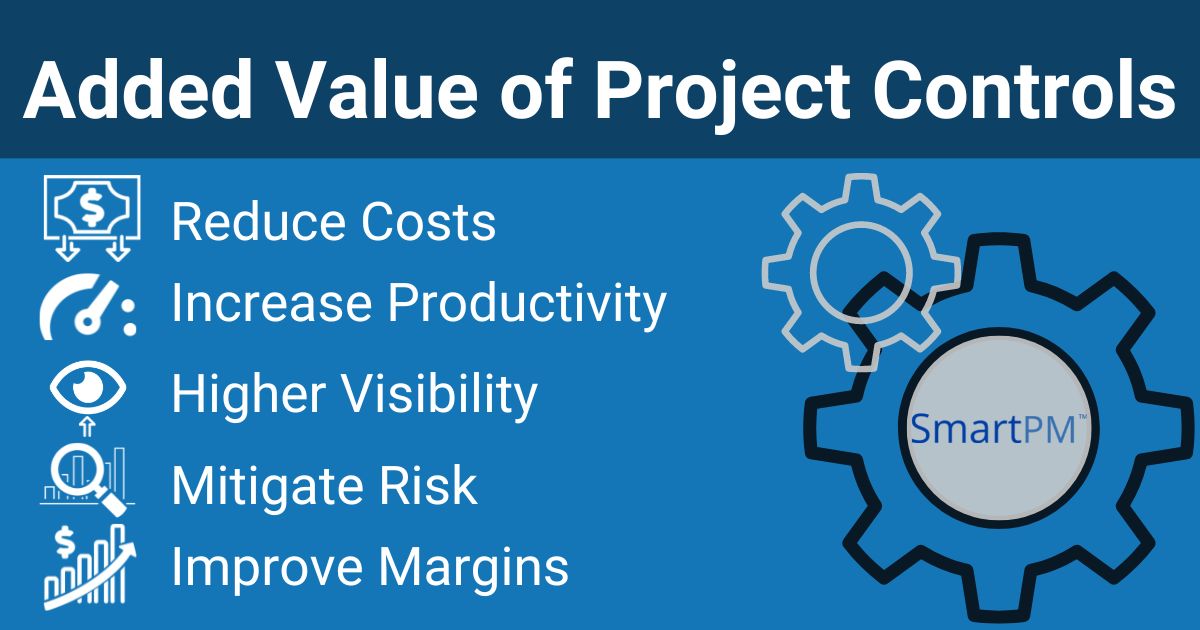 Project controls should be implemented in every project to ensure successful outcomes are delivered, but there is a challenge with getting everyone on the same page. Even though the benefits of implementing a project controls process into project management involve a relatively simple process, project controls continue to be underutilized and have not seen their full potential in the construction industry.

The Challenge with Project Controls

It is very fair to state that, in commercial construction, project controls aren’t top priority or even a term being discussed for a very large percentage of construction companies.  For many companies, contingency budgets and padding the schedule are the extent of their “project controls.”

SmartPM CEO Mike Pink has witnessed this troubling phenomenon first-hand. Here are some of his important takeaways from analyzing thousands of commercial construction projects: 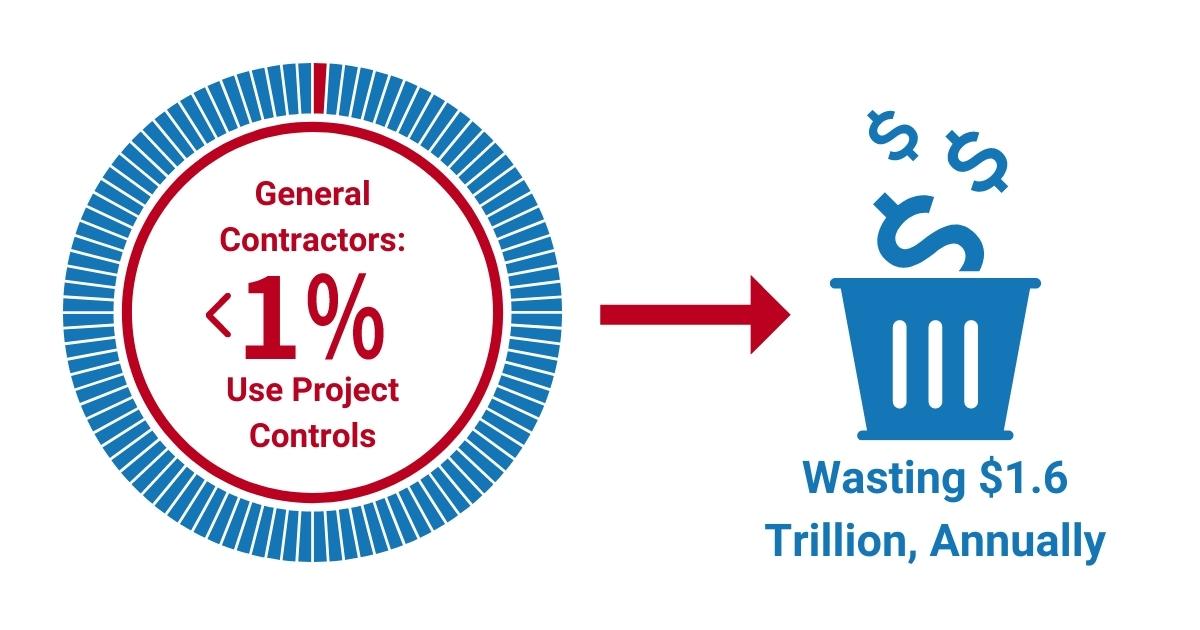 This poses yet another unfortunate reality: the lack of project controls has a great effect on the global economy and the environment. According to McKinsey, the construction industry wastes $1.6 trillion dollars annually in overspending, usually resulting from project mismanagement, delays, and overruns.

Take a moment to imagine the potential of what almost two trillion dollars could have been spent on, every year…

If hearing “construction delays & overruns” is beginning to sound like a broken record, it’s because it is. It’s what every technology claims to solve.  Project management systems, mobile apps, BIM, drones, and document control tech all claim to help eliminate delays and overruns.  But if the goal is to systematically optimize construction, thereby ending delays and overruns outright, project controls are the only real answer.

The reality is delays and overruns have the ability to be negated, wholly, through analytics designed to support “Project Controls”.  Yet, it seems many owners, project managers, general contractors, and schedulers would rather leverage overoptimism bias about project timelines instead of managing with objective and useful data based analytics.

As time has progressed, delays and overruns have become a normal part of construction instead of leveraging technological capabilities, to eliminate waste, like the majority of other global industries–hence the broken record.

Project controls provide ample opportunity to fix these issues, but the answer is at the crossroads of “Project Controls” and “Technology.” After all, very few companies have the budget to hire consultants on top of every project. Not to mention, there isn’t nearly enough time, or qualified people, to perform the necessary analytics to serve a fraction of the projects going on right now.

Project controls can be a very broad subject matter, but there is a unique data set that exists on most projects. If studied thoroughly and often, it has all the answers embedded within to effectively manage outcomes. It’s the project schedule.

Why the schedule? It's the only data set that connects all parts, pieces, and responsibilities of a construction project into one systematic document.  It achieves this through the listing of activities, durations, and logic.  It’s the logic that explains how everything is interrelated–showing a “reaction” to impacts.  Logic is a leading indicator and explainer of problems, as opposed to cost data, which is the “lagging indicator” of the result of the problem.

Unfortunately, an estimated 88% of schedules aren’t built well enough to effectively manage a project.  What does this mean?  It means that, by and large, the industry lacks true understanding of best practices in scheduling to actually build schedules that are effective and reliable.  Things like missing logic, too many high durations, missing crew logic, too many constraints, etc., result in schedules that don’t accurately highlight the true critical path of the project or calculate float values accurately.

So, when using a scheduling program that is designed to tell you what “critical” trades towards managing to an end date are inaccurate, projects become mismanaged, entirely. It’s as simple as that.  Needless to say, any schedule analytics that are based on erroneous schedule data are inaccurate, therefore unusable.

To get to the point where your schedule is strong enough to implement an analytical process that supports project controls, project teams need to have a routine schedule quality check as a first step - this, in and of itself, is a project control. Schedule analysis is only possible when the data is trustable and reliable.  Without structured & accurate data, pulled from a high quality schedule, project controls cannot offer the key metrics accurately either.

Any given construction project has a world of data behind it, which project controls help bring into light. As mentioned above, there are many different avenues to achieve an effective project control process, but here are five we believe to be most helpful in delivering the highest quality project:

Project controls offer infinite possibilities for project managers to take control of their projects again. The metrics above, and all the other ones not listed here, allow project managers to track actual insights by assessing activities required against budget or volume of material to see how projects are progressing in real-time. 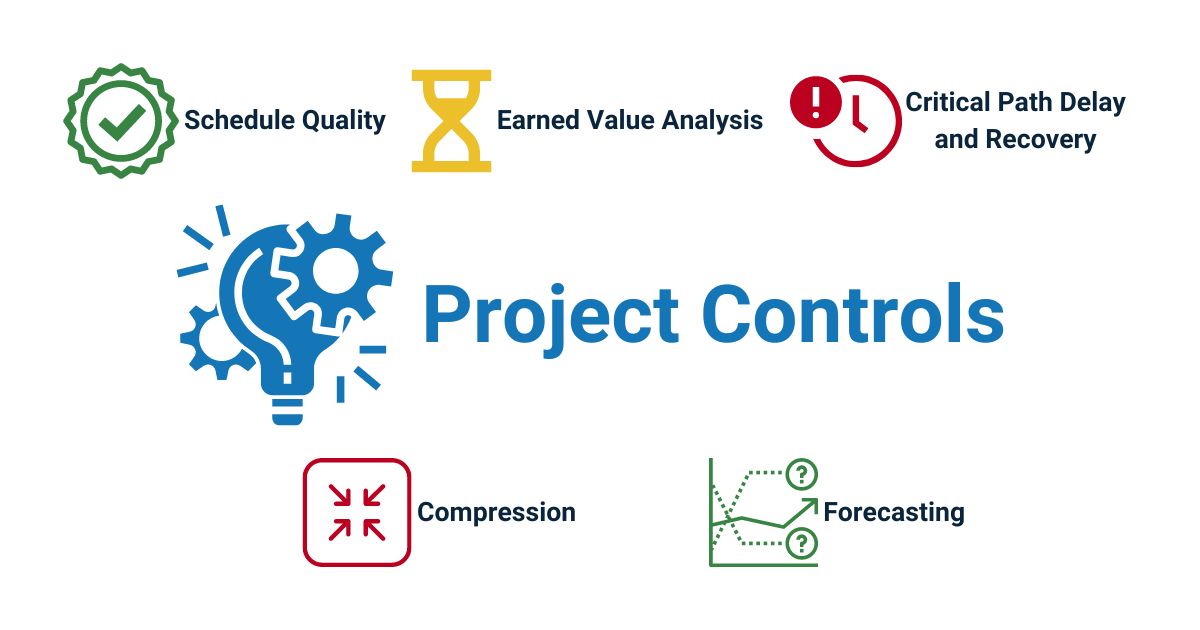 But, how do project managers begin using project controls as part of their daily practices? This is a tall order, definitely easier said than done.

The easiest way to get started implementing project controls to measure accurate project performance is software. By deploying software designed to support project controls, all stakeholders–including construction executives, project managers and superintendents–have the ability to gain visibility into things like subcontractor performance, risk, impacts, delays, inefficiencies, predictions, etc., in ways they never have before. This results in better, objective, fact based decisions.

Having the opportunity to turn all project participants into project experts, at the click of a button, is game changing. The metrics offered by automated project controls have a lot to offer the construction industry such as:

If less than 1% of General Contractors are utilizing the power of project controls, then project controls are not being implemented across most commercial construction companies–excluding top ENR firms who consistently win bids, turn high profits and grow. 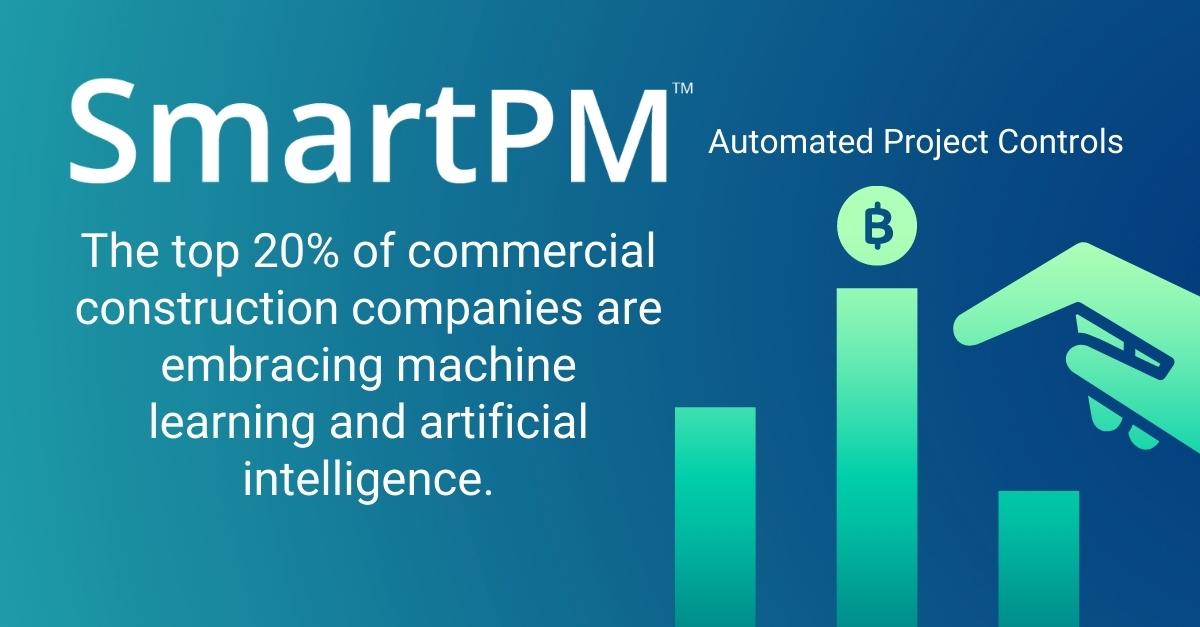 Claire Turner is the Marketing Communications Coordinator at SmartPM who manages and creates content in social media. She specializes in copy writing, social media management, and event planning.